Aegis Defenders is a 2D, exploration-focused platformer with tower defense inspired combat. Designed to invoke a nostalgia for the 16-bit classics we played as kids, Aegis also includes the huge leaps and accessibility and design that have been made since then.

I worked on Aegis Defenders as an Associate Producer during the Summer of 2014 assisting Lead Producer Scott Stephan on a variety of tasks. This included ordering informational postcards, setting up the Studio Guts’s booth for the Media Indie Exchange and Anime Expo conference, organizing team meetings and contacting various media outlets to inform them of our kickstarter campaign. We launched the Aegis Defenders Kickstarter in August of 2014 and raised over $145,000. The game is now avalible for puchase on PS4, Steam and Nintendo Switch platforms. 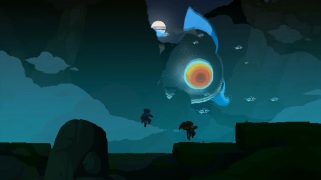