While my team and I were making the Ultimate Celebration for our Global Game Jam (GGJ) 2011 game in Rochester, my friends Ben Saxe and Dan Sternfeld was working on their own game in Albany. The game was just known as Fade. It had the simple mechanic of the player “Fading” away the environment to help the main character to get to the exit. It was all programmed in Flash. While the art was simple, the mechanic was intuitive and anyone could understand it with just a look. Their game has won Best GGJ game in Albany. This signal to Ben and Dan they have a winning game mechanic on their hands. After GGJ, the two got together to continue to work on the game and to redo the game engine since it was just created in 48 hours.

Then September 5, 2011 rolled around and I was able to meet up with Ben and Dan. They told me that they really wanted to release Fade on the iTunes store before they graduate from Rochester Institute of Technology (RIT) and wonder if I will be willing to join their team. My role would be to help them with the visual design and art assets creation of the game. I had a fairly pack schedule however I knew this was an opportunity to good to pass up. I happily accepted. I created some environmental assets such as the bricks, chimney, vines for the walls. and the diamonds you collect in the game! In addition to the environmental art, I also created the User Interface assets such as buttons and sliders. Over time the style of the game got more refined and not all of my assets made it into the final version.

Dan and Ben wanted a Noiresqe theme for the game since the main character, Pete, is a detective solving for the missing diamond. I went through many iterations of the buttons, bricks and diamonds to capture the feeling of the game. I worked with Dan and Ben it was exactly what they were looking for. Sometimes the buttons had too much bevel, the fade switches color was too close to the non-fadable switches, etc. It was important to work quickly since it the game was on a tight development schedule.

Over the course of the school year, the game went through intensive player testing making sure that all the information was being understood by the player without telling them too much. The team had an opportunity to display the game for the first time to the general public at a game exhibit hosted by the Strong Museum of Play. It was a lot of fun to see different people trying out the game. There was one player yelling at the screen “Not that way Pete!” ignoring her commands. It was an unintended side effect that made the people playing the game a joy to watch. The game continued to be tested with different people at RIT to ensure that all types of people’s feedback is received. It is a game designed to be enjoyed by everyone.

Ben, being the level designer, continue to iterate though his levels making sure that the difficulty is scaled accordingly and that they were intuitive. His level design really made use of the giant iPad screen. I remember some nights where he would just stare at the screen to come up with a level or to fix a current one. He would not sleep till it was completed. Dan, being the main programmer, worked tirelessly to ensure that the touch controls felt right and the respond of the game is snappy. Dan attack all aspects of the code to made sure that everything ran smoothly. He was really happy when the new air SDK was released since it improved the performance of the game dramatically. I remember the endless nights where these two will pour over every last detail to make sure everything was just right.

The game was finished and was shown off at the RIT booth at the Game Developers Conference 2012. Soon after that, the magical date of March 27 came and the game officially launched on the Apple iTunes App Store. The game have been sent to various mobile game review sites and they all gave Fade: Case of the Stolen Diamond two thumbs up! The mobile game site, slide to Play, declared that Fade is the number 7 game out of the 20 best iPhone and iPad Games in 2012 so Far. It beat out Angry Birds Space and Triple Town, both games that have a huge following. I am honored that I was given the opportunity to work on such a project and it is also the very first game that I ever helped release. You can buy the game on iTunes App Store or visit the for more information! Also visit their Facebook Page and like! : ) 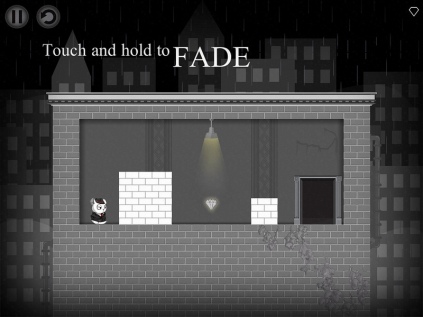 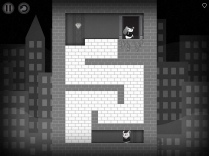